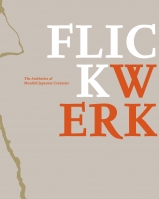 From aesthetic, technical and artistic viewpoints, the restoration of ceramics with lacquer (called kintsugi), which has been practiced in Japan for many centuries and which has been particularly cultivated since the sixteenth century, is a highly distinctive and extremely fascinating field of Japanese art.

As collective terms for all kinds of objects that have been restored with lacquer, the Japanese language contains the two words urushitsugi (“to patch with lacquer”) and ursuhitsukuroi (“to repair with lacquer ”), both of which have been in the language since the sixteenth century, as well as the word urushinaoshi, which denotes “lacquer repair”.

The usage of lacquer to artfully repair damaged or broken ceramics, however, is a specifically Japanese phenomenon that transcends the effect immanent in the materials and is based on aesthetic ideals which evolved in the culture of tea. This and other aspects occupy the foreground of attention in the exhibition entitled “Flickwerk – The Aesthetics of Mended Japanese Ceramics” at Cornell University in Ithaca NY, USA and at the Museum of Lacquer Art in Münster, Germany.

This beautiful and very instructive catalogue and complement of this exhibition (by Ms. Christy Bartlett, Dr. Charly Iten and Prof. James-Henry Holland) can be viewed online or downloaded as a pdf. Read all about ceramics mended with lacquer, its fundamental aesthetic principles, techniques and artistic concepts.